Discuss all things Stags and Football League Two, and share stuff using our BBCodes.
Forum rules
Please read the Posting Rules before participating. Posting on the forums is subject to adhering to these.
Also, see the Guidelines for Posting. Moderators may sometimes tidy posts which do not follow these customs.
Post a reply
85 posts • Page 3 of 4 • 1, 2, 3, 4

We have been wanting in this role to move the club forward.

Perhaps mr broughton can repair the roof in the west stand.

MTFCMAD wrote:Some real wide swing and a miss posts on Facebook regarding this.

The fact people take there own comments as actually fact is worrying in today’s age.

What do you expect with the 5G and Bill Gates is a killer crowd out there ?

This is small fry
Every man thinks meanly of himself for not having been a soldier...

Seems sensible. The Radfords have to accept that they can't run the club on a day to day level when they're out of the country, and asking the team manager to take care of the whole picture all the time isn't going to work out well. So Sharpe can be the middle man. The timing seems a bit odd, but then why wait?

Good move IMO, been crying out for this for months. Someone who can oversee football operations, and who at least appears to understand football with a track record of success.

This could be the best ‘signing’ for a long time.

surprised Stevo hasn’t got his extendable mircrophone out & interviewed him yet !
Our time will come

yorkshire stag wrote:surprised Stevo hasn’t got his extendable mircrophone out & interviewed him yet !

For anyone who hasn't spotted it, there is a 7 minute interview from Radio Nottm further up this thread.
"Four points clear as Lincoln are McCaffreyised", CHAD headline, April 1975

there is a 22 minute video interview with David Sharpe now on iFollow Stags
"Four points clear as Lincoln are McCaffreyised", CHAD headline, April 1975 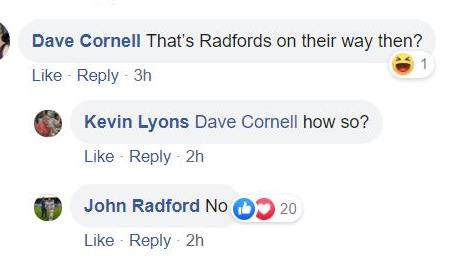 You do get some plonkers, surprised JR bothered to reply tbh

Was this the same Dave C who used to come on here?

Great appointment imo - in the past I've often felt we've had that footballing brain leadership missing to kick us on to the next level, & so always been stuck in the 'same old stags' mode. Hopefully DS will fill that void
If i look in pain it's because i'm thinking

MutinyOnTheCounty wrote:Was this the same Dave C who used to come on here?

kevin kents tasce wrote:My initial reaction to this is that it's a positive move for the club, for a few reasons. Firstly he is a football man, with actual experience of running a club and achieving success with them. He also appears to be from outside JR's usual circle so should be able to offer fresh perspective which could be invaluable to the club. It also offers someone in a proper leadership position when the Radford's are in Portugal.

The rest of the board should be absolutely applauded for thier efforts with the club, but none of them have the football experience that Sharpe has, so he adds value to club decision making at strategy. You never know, it may be that JR finally realised that he needed football people around him after seeing what happened when he sacked Flitcroft after consulting the current boardroom?

The risk is of course that he and Coughlin clash. Hopefully this doesn't happen, but if it does then I would expect JR to back Sharpe as the club need a long term vision and strategy, which can only be achieved through continuity at board/director level.

I'm really excited now. Hopefully the next month or two will see some ins and outs on the playing side and we can enter the next season fully prepared as opposed to the shambles of this year.

kevin...I shall print that out and put it in a brown envelope in my desk and surface it in due course as and when.

I'm in awe that Sharpe has the football 'experience' he has and perplexed that he may well be backed up regardless as you suggest. If he is that good, could he have been picked up by other Clubs higher up?

Who knows how it'll turn out?

It's got to better to have a director steering the strategic decision making at the club rather than employing five managers in five seasons who all have different styles of play and bring with them a turnover of players at who knows what expense.

It must also be a positive to have someone who has been the chairman of a club twice printed to the championship under his watch to be assisting with the strategic decision making and running of the club, as opposed to a local builder who's history of football is stood on the terraces.

It may also help that he might have a less emotional response to the idea of selling players for decent fees. Not selling Green, Rose, McDonald and Hamilton for fees rumoured to be in the region of £500k or higher have all been proven to be poor decisions in the long term and had it not been for the deep pockets of our chairman this kind of money could have been the life source of the club.

One of the things I love about football is it's unpredictable nature and whether I am proven right or wrong in my opinions is part of the fun!
Everything Is Borrowed

http://d3d4football.com/30-minutes-with-david-sharpe/
You've got to go there and come back, to know where you've been.

Good interview by him.

Finally looks like we’re going to be a lot smarter when spending money instead of just blowing it on big names players.

Yeah he's pretty good you know. Talks sense without bet overbearing or condescending like that 'mental coach' we had... Drew Broughton.

Interesting listening about how the club is arranging and organsing it's self. Must be hard to prepare if you don't know if there is a wage cap or not. He identified that age and length at the club were major factors in letting players go, ie, not being saleable assets anymore, and average age of the squad was nearly 30.

I also liked the large dose of realism dropped in - we finished 21st last season. So there is work to do.

I wish they'd asked more about his involvement with the player agency and how he can lever contacts there.
You've got to go there and come back, to know where you've been.

This link not working for me, is there another please ?