Discuss all things Stags and Football League Two, and share stuff using our BBCodes.
Forum rules
Please read the Posting Rules before participating. Posting on the forums is subject to adhering to these.
Also, see the Guidelines for Posting. Moderators may sometimes tidy posts which do not follow these customs.
Post a reply
74 posts • Page 2 of 3 • 1, 2, 3

Living in the south I do not want regionalised leagues obviously. Surely you have to you have to have a mixture of teams geographically. It would be like going back in time and be so dull. It’s never going to happen.
Mansfield Town, my club even though been exiled in London since 1983.

Sandy Pate Best Stag wrote:To split leagues 1 and 2 into north and south, it would mean the championship agreeing to relegate 4 teams which I can't see happening. The only alternative would be to promote both champions and have a playoff system for the third place. If that were so, you could not really have any other playoffs in the divisions as you could finish 2nd and still not go up.

We've seen that system in the conference and look how hard it is to get out of there. The plus side is that only one team would be relegated to the pit of hell.

It would mean a massive shake up of the entire promotion/relegation system to avoid that scenario and agreement across all of the leagues.

To me it’s an excessive step to save on average an 30miles less an away day.

Yes I agree. I think it would be a backward step with no long term advantages. The promotion/relegation issues would just cause a log jam (as in the conference) with clubs overspending and in more danger of going bang. Certainly the steps from League 1 to the premiership would be harder for clubs that have temporarily slipped down the pyramid.
Who are you calling pedantic? I resemble that remark!

So was there an outcome of this meeting?
You've got to go there and come back, to know where you've been.

I wonder if prem teams will offer the elf teams cash to complete the season.

arsene wengers coat wrote:So was there an outcome of this meeting?

not seen anything so far

This would be a good place to check on an ongoing basis if anything has come out: https://www.newsnow.co.uk/h/Sport/Football/League+Two

update - here it is:

Sounds like another of those most productive of league meetings.

It sounds like many clubs would vote to abandon the season if it goes past June 30th.
I'm sure I've read 56 days to complete games.
It's not looking good at the moment.

"A latest suggestion would see each of the three divisions below the Premier League — Championship, League One and League Two — next season divided into north and south sections as a means of cutting travel and accommodation costs to help cash-strapped clubs."

Peter Swann has issued an urgent call for football’s decision-makers to act quickly and ‘save the future of lower league clubs.’ The Scunthorpe United chairman believes the situation is reaching crisis point and tough decisions have to be made one way or another. It comes ahead of the latest meeting of League Two clubs on a video call with the EFL, when the big issues will again be debated, such as if, when and how the season should be restarted, plus finances and the critical problem of clubs having no income during the coronavirus pandemic. According to Mr Swann, it’s time for actions to start speaking louder than words.

“All governing bodies need to step forward now with a unilateral plan to secure the future of lower league clubs,” he said. “League One and Two clubs must be the priority at the moment because we get the least of all the TV money that comes into the game. We are at the bottom of the pile. We definitely need help to get us through – and then start working up the leagues. Get League Two surviving, get League One surviving, then see what we can do for the Championship. We are not here for hand-outs usually – but this is for the future of football. This is about the future of the whole of the football league. We need help. We will need a cash influx from somewhere.

The most important thing is we need an end date. We need to know when we will be playing. Or if the season is going to be cancelled, we need to know that too. We do need to be making some very difficult decisions very quickly. You can’t keep drip-feeding money into the game when there’s nothing at the end, no income. If you have no income it will make a huge impact on clubs, especially smaller clubs like ourselves.

Mr Swann continued: “We really need some quick direction and foresight and some financial help. We need financial help for every club, I do not want to see a single club go. Never mind what they were doing before this or what they will do after it, to lose a club because of Covid-19 would be a disaster for the league."

Hopefully our saviour could be that insurance companies are making a huge profit.
Less cars on roads means less accidents.
One insurance company is giving every customer £25.00 back.

Mr Radford confirmed his desire in a letter sent to EFL chairman Rick Parry, and released to Chad, following a series of meetings with fellow League One and Two club owners.

The owners met to discuss their concerns over the issues raised by the Covid-19 fall-out, with Mr Radford chairing the meetings.

EFL clubs are struggling to make ends meet due to the coronavirus pandemic
Clubs from League One and League Two have been holding remote meetings
John Radford, the chairman of Mansfield Town, has taken the lead on discussions
A group of 34 clubs has written to the EFL to suggest a salary cap be introduced

from the Daily Mail article: 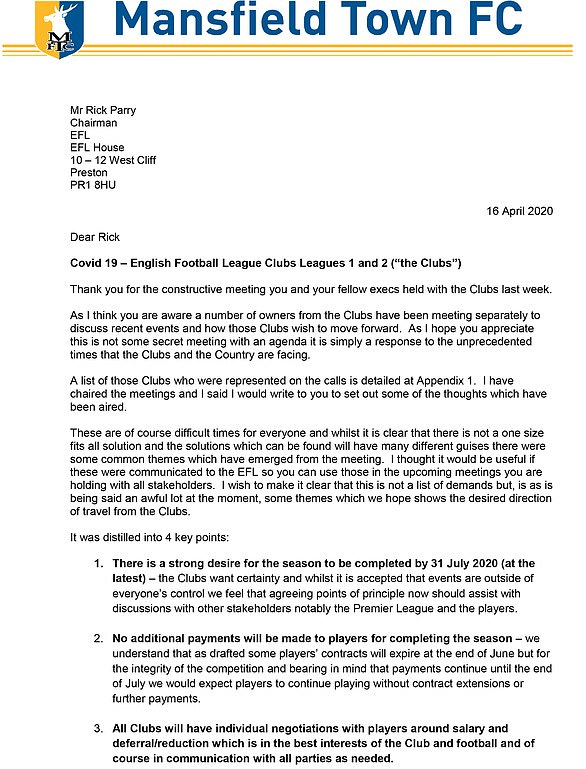 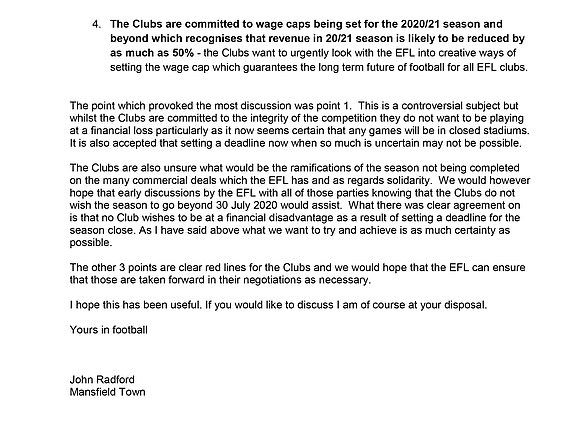 A few interesting points there.

It would appear that a few players will be disappointed they will be expected to play until the end of July for no extra money. Traditionally this is when statutory holidays are taken and players take their families away for a break. I suppose clubs could tell players to take their leave entitlement now even though they cannot travel.

If a wage cap is put in place, what will happen if the national league don't follow suit and allow clubs to pay more? Will the better players drop down the leagues to earn more money? Would there be a temporary exemption for promoted national league clubs with players on higher wages still under contract?

More questions than answers I think.
Who are you calling pedantic? I resemble that remark!

Speaks volumes about him as a person, he must be held in high regards by other clubs to be chosen as the spokesman.
Let's hope the efl listen to the points stated.

Great to see JR taking the lead and like the letter he has set out
All depends on the medical and scientific side as even behind closed doors there will be contact for 90 mins with trainers and managers medics etc
In essence not purely a football decision at all but what do any of us know as they speak tonight about social distancing for a year !!!

The players who’s contracts expire at the end of June will have a real dilemma.

Do I ask for another year and refuse to play beyond June if not offered one?
Do I instruct my agent to contact clubs with a view of my future elsewhere?
If I’m offered a role at a rivals club, do I risk injury playing for MTFC out of contract?
Am I insured to play?

Beano wrote:The players who’s contracts expire at the end of June will have a real dilema

Because they would have had 8 weeks full pay without playing a game.

Beano wrote:The players who’s contracts expire at the end of June will have a real dilema

Because they would have had 8 weeks full pay without playing a game.

Yes but don't forget that they have statutory holidays and bank holidays to pull in. These are normally taken in June/July but they can't do that if they have to play. You may say they haven't done anything for weeks except ring fans up etc but the clubs should have put them on leave if they wanted them to play later.

Some will undoubtedly say that they have a soft life, but having been compelled to work bank holiday periods myself, I know how disruptive it is to family life. No two week breaks at Chrimbo or long Easter breaks for players and even when they do get holidays, they still have individual training regimens to go through.

All families need unhindered time away if they can afford it. Footballers are no different.
Who are you calling pedantic? I resemble that remark!

Most players don't give a fig about working Bank hols n Crimbo. It's football, it's what they've wanted to do all their lives. I'd imagine if you gave them the choice of playing footy on Boxing Day or going round the sales in IKEA etc with t'kids n trouble n strife they be not short in givin footy the nod, it's the business they've lived and strived for all their lives for since they first kiced a ball.
Theirs not to reason why
Theirs but to do and die
Into the valley of Death
Rode the Six Hundred

Spiritater wrote:Most players don't give a fig about working Bank hols n Crimbo. It's football, it's what they've wanted to do all their lives. I'd imagine if you gave them the choice of playing footy on Boxing Day or going round the sales in IKEA etc with t'kids n trouble n strife they be not short in givin footy the nod, it's the business they've lived and strived for all their lives for since they first kiced a ball.

Of course they accept it as a normal part of the job but this wouldn't be normal would it. They will have gone almost a year since their last holiday and if they don't get a break in July (and the new season starts on time) they won't get a break until June 2021.

Families grow up fast and time with young children is precious. It's not critical to complete this season so why cause so much disruption?
Who are you calling pedantic? I resemble that remark!

The players whose contracts expire at the end of June also receive a month's pay for July.

Tippy Tappy Football wrote:The players whose contracts expire at the end of June also receive a month's pay for July.

Is that holiday pay?
Who are you calling pedantic? I resemble that remark!

Tippy Tappy Football wrote:The players whose contracts expire at the end of June also receive a month's pay for July.

Users browsing this forum: No registered users and 31 guests